MARKET REPORT: Global equity markets suffer another day of heavy losses as investors worry about the outlook for economies around the world

By Hugo Duncan for the Daily Mail

Global stock markets suffered another day of heavy losses as investors worried about the outlook for economies around the world.

Seeing red: On Wall Street, stocks fell again at the open after a sharp sell-off on Thursday evening

There were similar losses in Europe with Germany down 1.6% and France down 1.7%.

On Wall Street, stocks fell again at the open after a sharp sell-off on Thursday night that saw the tech-heavy Nasdaq and the Dow Jones Industrial Average plunge. The rout came a day after the Federal Reserve raised interest rates to the highest in years – by 0.5 percentage points – and warned that more were to come.

Yesterday in early trading, the Nasdaq fell 2.1%, while the Dow lost another 0.7%.

With rising interest rates in the United States, the dollar hit a 20-year high against a basket of currencies from around the world. The pound fell below $1.23 for the first time since June 2020 amid concerns over the UK outlook.

As investors wrestled with what’s next, Bank of England chief economist Huw Pill said he faced a delicate balancing act in seeking to raise interest rates enough to control inflation without harming the economy.

In its half-year report, it said revenue of £74million was 36% lower than the same period last year.

And Numis, despite posting its second-best half, could not escape investors’ fears over the war in Ukraine.

Analysts have also warned that Germany could already slide into recession after a 3.9% plunge in industrial production in March as the invasion of Ukraine took its toll.

U.S. jobs numbers, meanwhile, showed employment rose stronger than expected by 428,000 last month, which did little to deter the Fed from further rate hikes in the coming months. 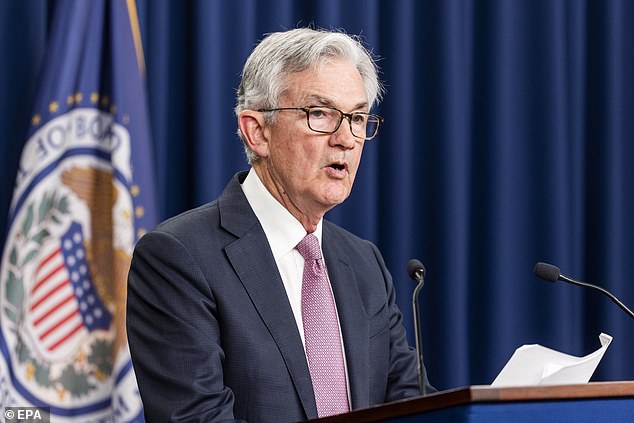 On the rise: The US Federal Reserve raised interest rates this week

Building materials retailer CMO said it has seen cost inflation of 5.5% over the past year and expects that to accelerate.

Chief executive Dean Murray said he saw lower inflation than rivals because of his product mix, but saw supply pressures driving up prices.

Revenue rose 46% to £76.3m in the year to December, buoyed by its acquisition of Total Tiles.

Some links in this article may be affiliate links. If you click on it, we may earn a small commission. This helps us fund This Is Money and keep it free to use. We do not write articles to promote products. We do not allow any business relationship to affect our editorial independence.